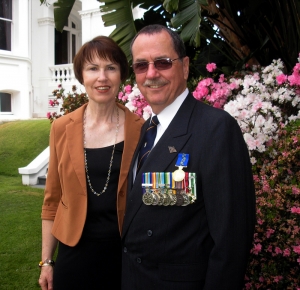 Francis Harding (Frank) Benfield is a graduate of the Army Apprentices School and University of Southern Queensland. He served in the Australian Regular Army from January 1963 to March 1983, rendering operational service in Vietnam and defence service in Australia, in TPNG, Indonesia, Singapore and Malaysia.

As a civilian advisor he worked with the Royal Thai Navy Air Wing from 1984 to 1987. Subsequently he worked as an academic and unit leader at the University of Southern Queensland and the Queensland University of Technology. From 1980, Frank worked as an advocate and representative on behalf of veterans and their dependants in the fields of pensions, advocacy and welfare entitlements.

He advised and instructed various ex-service organisations, especially in the field of advocacy on behalf of veterans and their dependants. From June 1999 to April 2012, he was a Services Member of the Veterans' Review Board. Frank was a member of the inaugural Prime Ministerial Advisory Council on Ex-Service Matters from September 2009 until September 2012.

As a member of PMAC, Frank participated in the Federal Government's Review of Compensation Arrangements (the Review of the Military Rehabilitation and Compensation Act 2004 and its interactions with the Veterans' Entitlements Act 1986 and the Safety Rehabilitation and Compensation Act 1988) from June 2009 until February 2011 when the Final Report of the Review was delivered to the Minister for Veterans' Affairs. For his services to the veterans' community, Frank was awarded the Medal of the Order of Australia (OAM) in June 2011.

"The aims and objectives of AFOM to provide funding which encourages and promotes relevant education, research and the advancement of health and well-being of partners and families of the ADF community have grown out of an identified need and are highly commendable. Such research and development requires:

· the establishment of grants, scholarships, fellowships, prizes and awards;

Frank & Clare Benfield particularly applaud the fact that the aims and objectives of AFOM will be responsible for improving outcomes in the areas of care and prevention of mental health and psychosocial problems within the ADF community for this is an aspect of research that has been given insufficient priority and attention in the past and should be accorded the highest priority in the future. I am proud to contribute to further the welfare of partners and families of the ADF community in this manner."