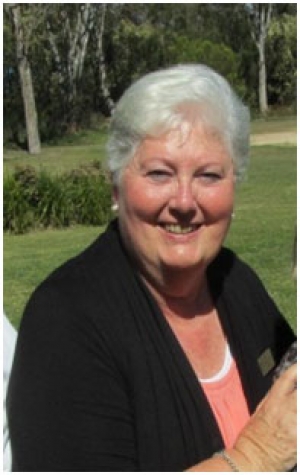 In 1991, I became an Outreach Coordinator for the Vietnam Veterans Counselling Service. I was with them until they closed the volunteers down. During this time I had started a Ladies group, Wives of Veterans.

We had weekly meetings and Bar B Q's also holidays with some other groups in Qld. Some wives had never been on a holiday in their married lives.

A members' child was diagnosed with a spinal tumour and so we had Bar B Q's to raise funds to help with expenses. We also got the Wolverines (a rock band) on board to give a concert. Their song 65 roses came out of this. I was also doing pensions for war widows and supporting my husband who was also doing pensions for all veterans by doing research and phoning DVA VVFA ext. I then became a founding member of the PVA. This was to accumulate a lifelong dream to have Wives and Partners all over the state linked in unity to help one another if and when necessary.

I was awarded the Anzac Award in 1999 with my Husband, for services to the Veteran community.

I have continued to work with the wider veteran community. I am also a Deputy Controller with the SES. My unit is at Nymboida near Grafton were we have retired to. I am also working on helping to write the new carers act NSW.
In 2012 I was awarded the O A M for service to the veteran community and SES also the Aged community in Grafton.

I believe this Foundation is something that should have been established years ago. I am excited to be part of something that I truly believe in, and a cause that I am devoted to, that is the good Health and Well-being of Families of the Australian Military.